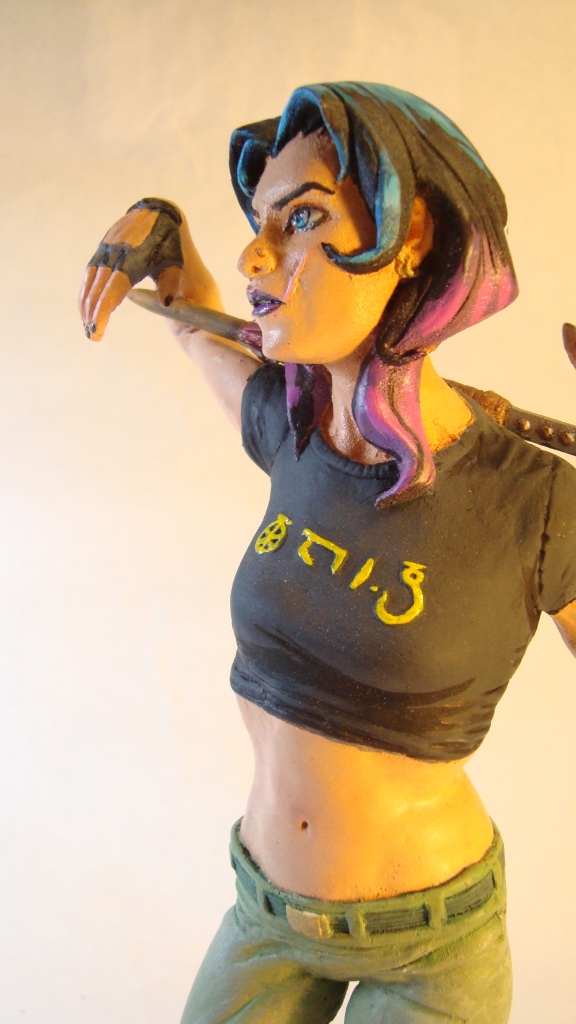 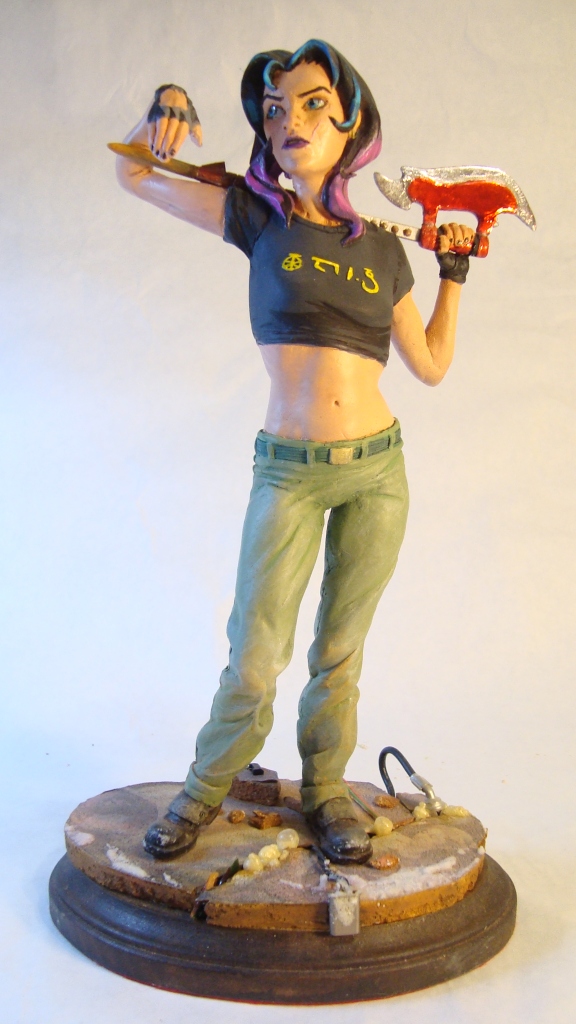 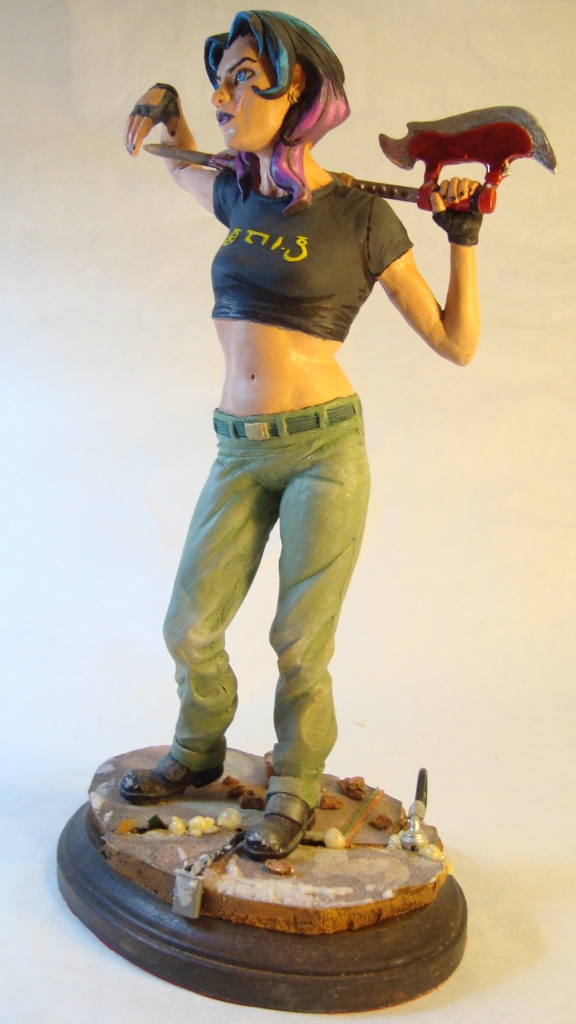 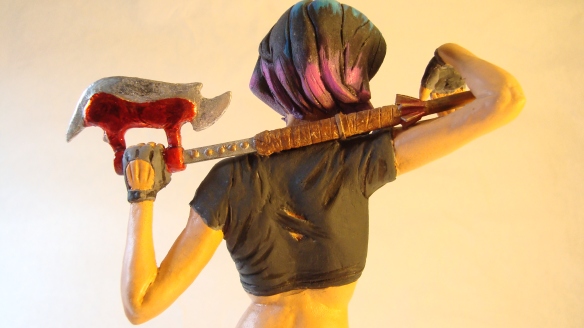 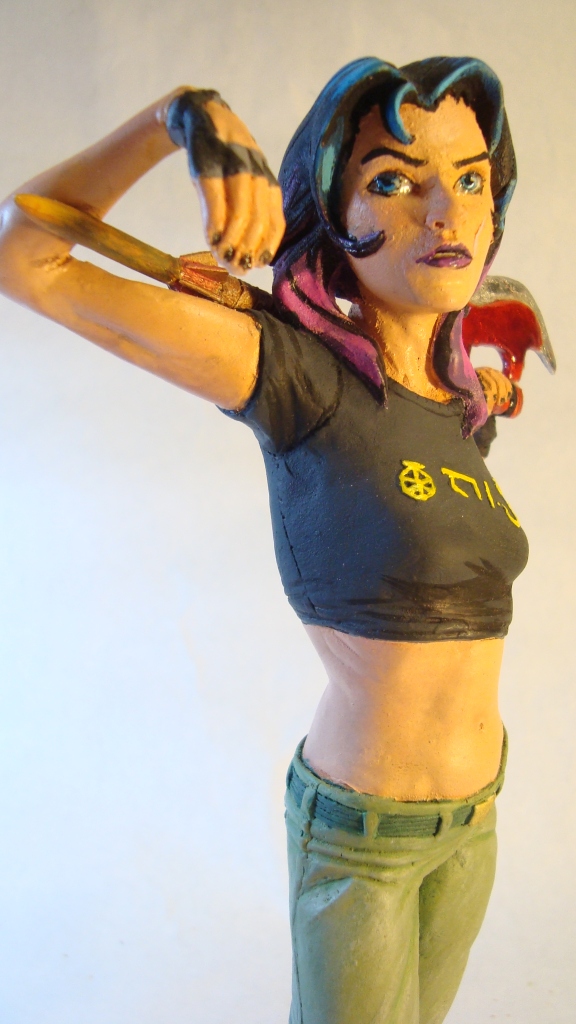 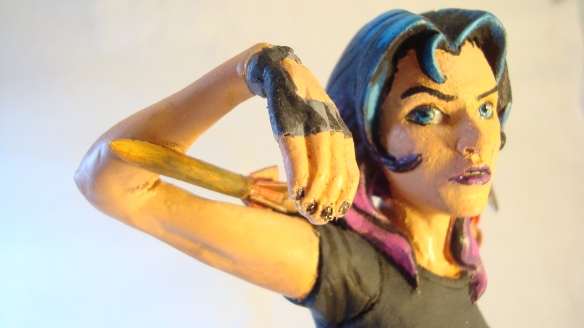 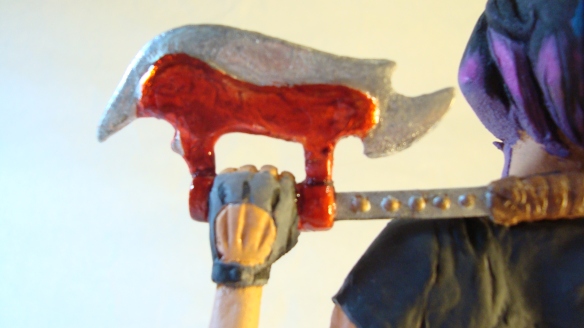 From the comic book series by Joss Whedon and Karl Moline, this is Melaka Fray, Vampire Slayer of the future. Closely tied in with Whedon’s TV series Buffy the Vampire Slayer, Fray tells the story of a Slayer disconnected from the lineage of Slayers, in a world that’s forgotten what vampires are.

Fray’s look here is taken from her look in issues #5 and #6 (although artist Karl Moline alternated between giving Melaka a holstered laser gun and omitting it- deadlines!), my favorite of her several looks. I tried to copy the weird glyphs on her t-shirt without having any idea of what they mean. I was amazed when the Scythe, which  first appeared in the FRAY comic book, appeared in live-action on Buffy. In the comics it looked slightly different, so I went with the more finalized, real-world prop’s appearance.

Down at Fray’s feet, you can see a tile floor depicting martyred saint Margaret of Antioch slaying a dragon. Wires, insulation, and machinery have been clumsily threaded through, the future intruding into the past.

Fray was sculpted a 1/6th scale; I made a guess at her height based on Moline’s drawings, but made her taller than Buffy star Sarah Michelle Geller. This turned out to be wrong when Fray and Buffy finally met in Buffy comic books, where Buffy was a bit taller. It was sculpted with Sculpey III, Sculpey Firm, and Apoxie over an aluminum armature. The Scythe was carved wood and a brass rod. These were molded in Smooth On urethane rubber and cast in Smooth Cast 300 resin, primed, and painted with acrylics and Tamiya enamels.

My friend, photographer Patrick Lentz, shot reference photos of a model, Sue, for this piece. I wanted Fray to have a kind of weary but still defiant look here, and I couldn’t have done it without them. Thank you, Pat and Sue.